A Bonded Retainer Might be a Better Choice After Braces 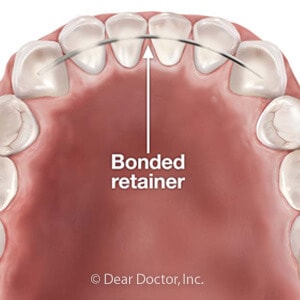 The braces are finally off! But to keep your new, straighter smile you’ll need to wear a retainer for some time. That’s because the same structural mechanism used to move your teeth could undo what we’ve just accomplished.

That mechanism resides in an elastic tissue called the periodontal ligament that lies between the teeth and the bone and attaches to both with tiny fibers. While the ligament holds the teeth securely in place, it also allows for slight movement in response to bite changes. Braces “pull” the teeth in the desired new direction, and the ligament responds.

But with that pressure gone after the braces’ removal, a kind of “muscle memory” can set in that moves the teeth back towards their original positions. A retainer, a dental appliance worn on the teeth, exerts just enough pressure to “retain” or keep the teeth from regressing.

Retainers are effective, but the most common type has a feature that poses potential problems: it can be removed by the wearer. Because of this, less disciplined patients might be tempted not to wear their retainer as directed. There’s also a higher risk of losing one and incurring additional cost to replace it.

But there is another type, the bonded retainer, which stays permanently in the mouth until removed by an orthodontist. It’s composed of a thin piece of metal that’s firmly attached to the back of the teeth with dental composite material. Not only does a bonded retainer solve the problems mentioned before, it also can’t be seen from the outside like a removable retainer.

A bonded retainer does have one disadvantage: because it can’t be removed, it can obstruct the teeth during brushing and flossing and require more effort. You won’t have as much difficulty with a removable retainer keeping teeth and gums clean. You can overcome this disadvantage, though, with specialized tools like a water flosser or a floss threader to make hygiene easier.

To choose which type of retainer is best for you or your family member, have a talk with your orthodontist. And if you choose a bonded retainer and later have it removed, be sure to switch immediately to a removable one if your orthodontist advises. With either retainer, you’ll be able to preserve that hard-earned smile for years to come.

If you would like more information on bonded retainers, please contact us or schedule an appointment for a consultation. You can also learn more about this topic by reading the Dear Doctor magazine article “Bonded Retainers: What are the Pros and Cons.”